As it borrows from both approaches but does some things slightly differently I thought it would be useful to share.

Firstly, I would recommend reading James’ and Orens’ articles. You may want to implement them wholesale or borrow from them like me to come up with your own solution.

Use SDK style projects and say goodbye to nuspec files

As suggested by James, converting projects into the new SDK csproj format with multi-targeting where necessary makes this process so much easier. It reduces the number of projects you have to deal with and removes the pain of having to keep dependencies in projects and nuspec files in sync, as you can remove any need for nuspec files.

The main points of my branching strategy are as follows:

In this case my major.minor is 3.1. I’ve indicated the public release comes out of master. This makes GitVersioning remove the commit id from the version number.

I’ve also enabled the build number in the cloud build so that VSTS builds reflect that correct build number for complete traceability.

I liked the idea of using master as the trigger for releases, that just makes sense to me, but I didn’t want to have more than one build script to maintain, i.e. one for develop and one for master.

Fortunately VSTS task groups and task conditions came to the rescue and I was able to use the same build Task Group for all my build definitions:

The first task (group) simply restores the nuget packages for the solution:

As you can see above I have several build tasks. These run based on conditions I’ve specified on the tasks. The first two are used for continuous integration, the third for pull requests and the last is if a variable called $(Forced) is set to true.

Here’s the condition on the first build, it runs if reason for the build is CI and the source branch is develop:

The second build task runs if a CI build is run and the source branch is master. The difference being that the master branch creates release packages, whereas the develop branch creates preview packages.

The third build task runs if the build is for a PR: and(succeeded(), eq(variables[‘Build.Reason’], ‘PullRequest’))

The fourth is run if a variable called $(Forced) is set to true. This allows us to use the build for any else that isn’t a PR or CI build.

I use similar arguments to James solution to do my build:

In the CI (develop) and forced builds the build and pack targets are specified,  the PackageOutputPath is set to be a folder called preview or forced in the $(build.artifactstagingdirectory), and set the PublicRelease argument to false for the develop and forced builds. This tells GitVersioning to add the commit id to the version number.

The other builds use combinations of these arguments with release builds going into a folder called release and PublicRelease set to true to strip off the commit id from the version.

I run tests using the dotnet test task. This is very straightforward. One tip: I just want it to run the tests, not build the code again so I run the tests with the –no-build  argument:

The publish artifacts task simply publishes the artifacts from the $(build.artifactstagingdirectory) to VSTS:

After this I end up with either preview or release package artefacts in VSTS ready for the release pipeline.

The next thing to do is enable a trigger to perform builds whenever the code in develop or master changes. This in turn will trigger the release mechanism described below. To do this go to the Triggers tab of your build definition and switch on Continuous Integration for the develop and master branches: 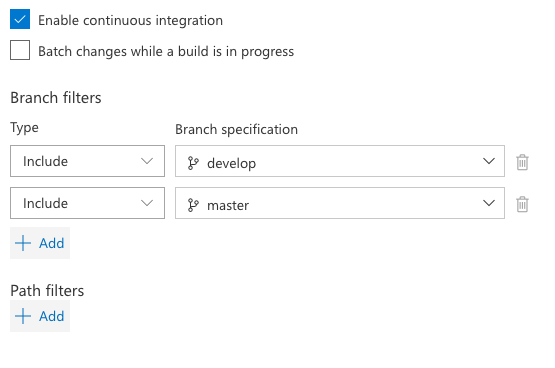 Now, whenever code changes in these branches a build will run.

The flow of the CI/CD pipeline is as follows:

The continuous deployment trigger fires whenever a new build is available from the  develop or master branches builds: 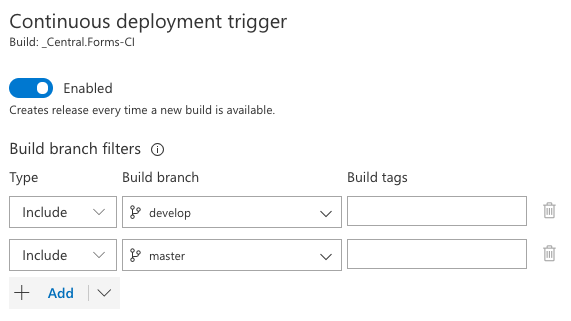 Each environment only has one task, to publish the artefacts (nuget packages) to a feed:

Note the publish task takes the packages from the preview folder. For release this folder is called release, i.e. they match the folders the build used when it created the packages.

That’s it. Thanks to James’ and Orens’ articles I was able to use some of their suggestions and create a CI/CD pipeline with my own twist to meet my needs. This really shows off the flexibility of using VSTS for (among other things) builds and releases.